“A man’s growth is seen in the successive choirs of his friends.”

What he meant was that, life is a layer cake son.

There’s levels to this shit.

As one of my mentors taught me, a man is the average of his five closest friends.

No offense to some of the friends I grew up with but you are who you hang with, and I’m not interested in selling or doing drugs.

At thirty, I am excited about life, I’ve awoken to my potential, and I understand what Ayn Rand meant about being motivated by the desire to achieve:

And it is this desire to achieve that has prompted me to seek a chorus of friends with whom I can do it.

Some men are islands, but I want to be a mountain.

And it has only been by standing on the shoulders of giants that I have come this far. Now I want to take my place in the river of time, and trust in myself and in the universe; myself via my own potential, and the universe via the infallible law of cause and effect. 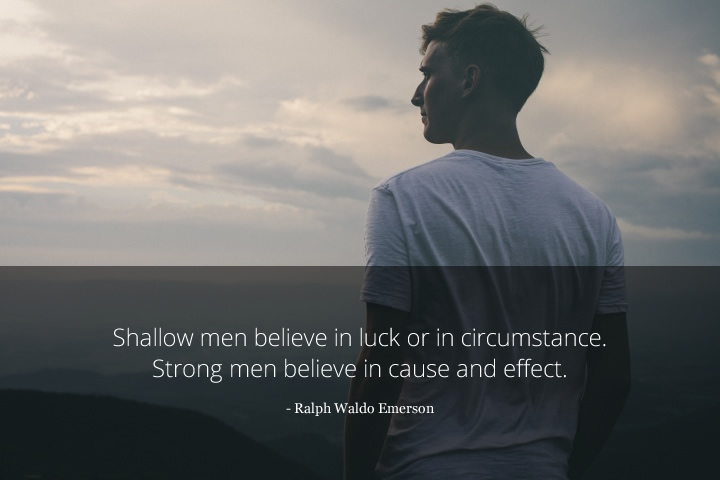 Or, as Vince Lombardi put it: “The man on the top of the mountain didn’t fall there.”

And – unlike the men standing on actual mountains in hip stock photos – when I look to the men on the proverbial mountains they stand on, I see men who have followed the law of averages; however – unlike other men – they choose their own average.

That’s not who I am today.

I’ve grown and I need the kinds of friends whom I can continue to grow with.

In pragmatic terms, I cannot get to where I am going alone, and nor do I desire to be there by myself, so I am making a big push to invest in the right friendships. And tonight as I had dinner at a girlfriend’s, I talked to her about how I am going to do this.

In short, to borrow the words of Ben Franklin, I want to bring “…most of my ingenious acquaintance into a club of mutual improvement.”

Ben Franklin called his club the The Junto, and they met on Fridays to discuss the things that were important to them; for after all, what is friendship built on but shared values. And the things I value are the things the guys I want to surround myself with value: happiness, growth, success, wealth – all the stuff that dreams are made of.

Today, some of the most successful and powerful men in the world are members of private clubs – from old-guard private gentleman’s clubs, to the Bohemian Club – they have been welcomed to the layer cake.

And I’m not looking to end up at a Bilderberg group conference in 15 years, but I am looking to live my wildest fucking dreams. And to do this, I know I cannot be an island.

I need friends as hungry and excited about life as I am. As serious as I am about gettin it.

So if I’ve sent this to you then chances are we had coffee recently  – or I invited you to grab coffee soon – and I already told you about this, but I wrote this because I wanted to explain the impetus for this group a bit more candidly.

At thirty, I tend to find myself working, hanging out with pretty women, and sleeping (In pretty much that exact order); however, every time I talk to a cool guy, I remember that I am missing out on what Cicero described in his essay, On Friendship:

“Friendships improves our happiness and abates our misery, by the doubling of our joy and the dividing of our grief.”

You see, I believe you can eat your layer cake and have it too. And in Twenty Sixteen, I’ll only be in San Diego once or twice a month, but when I am there visiting friends and family, I want to meet with this group, and I want it to be fucking awesome.

I believe in my intuition, and my intuition told me this is the next step – and to invite you.

To be clear, I’m not just looking to form some fucking lame ass mastermind group or something you have to pay some coach in order to “get motivated”. This group is for people who already are motivated. And it’s not something you will ever get a Facebook invite for.

I’m talking about a private group of the coolest, most driven, hungry, smartest motherfuckers I know.

A group of men who want to climb their own mountains.

Because, as Kerouac wrote in Dharma Bums, “In the end, you won’t remember the time you spent working in the office or mowing your lawn. Climb that goddamn mountain.”

Note: All further club business, including club mission, charter, guidelines, and monthly meeting notes – plus the requisite pictures of naked girls (jk) will be confidential, maintained on a club website (Live 12/15), behind a private encrypted login.

Just for fun, I created a poll of potential names for the Junto.

Anyone reading this is welcome to vote: